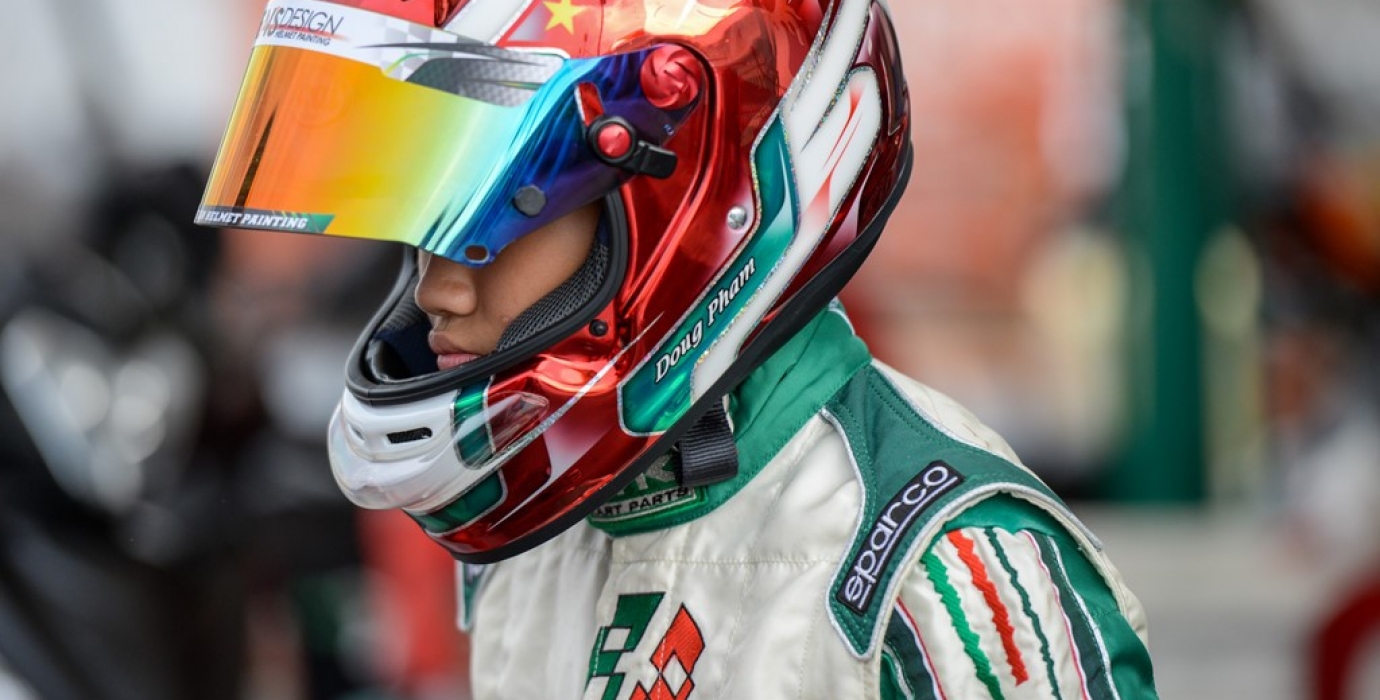 Doug Pham admires the legendary F1 driver Michael Schumacher and realizes his dream with training sessions on the Go-Kart.

On a weekend afternoon, the Dai Nam racetrack was soggy after a heavy rain, a young, dark-skinned boy who controlled the Go-Kart with a top speed of over 90 km / h, a skillful movement from acceleration to slide phase in bends. 90 km / h is a big number for a 4-wheeler vehicle lying close to the road without differential.

On the side of the track, the boy's father stood with his arms crossed, eyes staring at the fast-moving Go-Kart. Every time his child ran over, he would make a sign with his hand to remind him or encourage him. 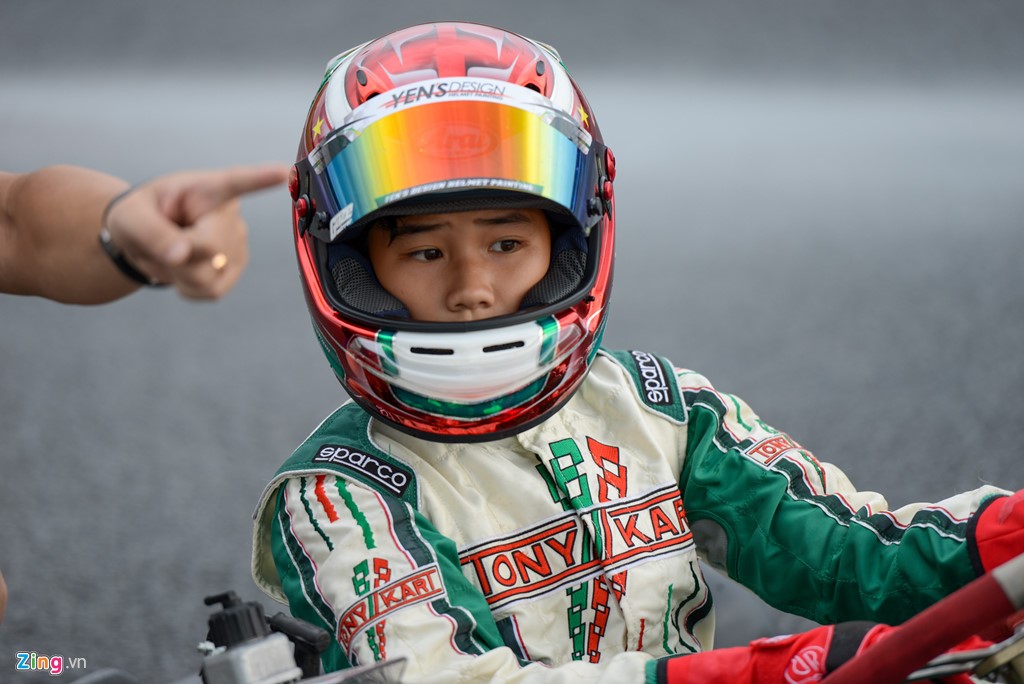 Doug Pham in a training session on the Dai Nam race track.

The boy was 11 years old, named Pham Hoang Nam, but he wanted everyone to call Doug Pham. He liked this name and often said loudly "the name is Doug" to remind someone to call him by his real name, maybe because he wanted to aim for a further future, racing overseas.

"But many people believe that racing is still a mischief of young people," said Pham Lan, Doug Pham's father.

The club led by Mr. Pham Lan is the only place in Vietnam that has a professional Go-Kart training form. Previously, this subject only appeared in the form of entertaining nature.

Go-Kart is the first subject of most professional racing drivers, especially Formula One (F1). Racers start from Go-Kart, then to higher races, or larger cars. 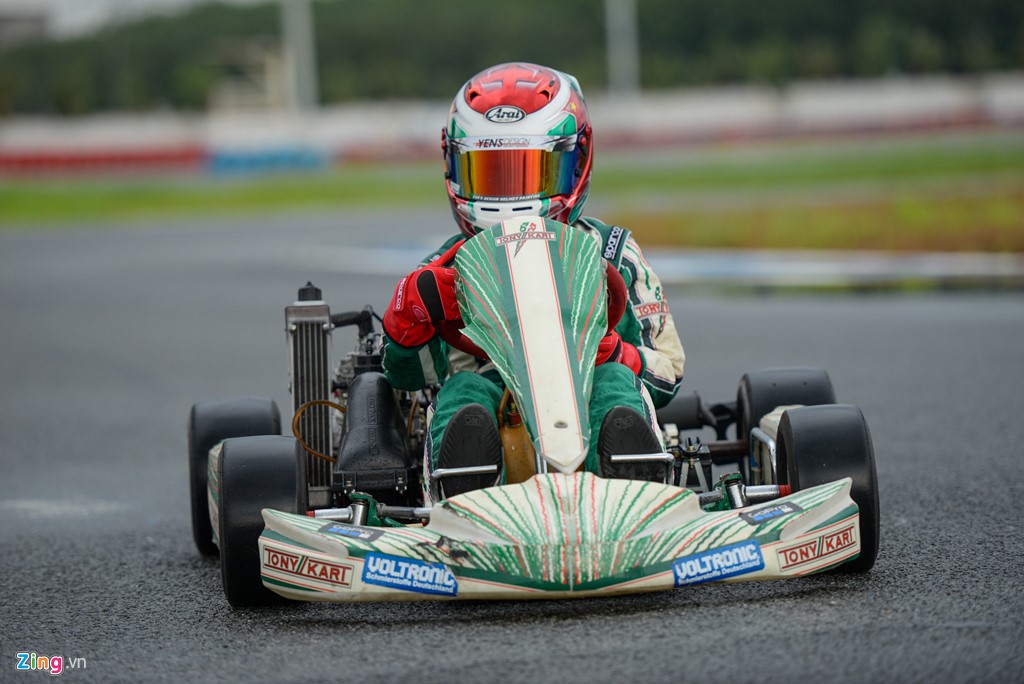 Michael Schumacher, one of the greatest racers in history, who has won the world title seven times, also has a childhood associated with the Go-Kart. At the age of 4, Michael acquired his father's lawn mower Go-Kart, and two years later the German boy had his first title in the Go-kart club near by.

Doug Pham is currently the best rider of the first youth of the professional TrippleX Karting Go-Kart club that Pham Lan developed in Vietnam.

The 11-year-old started studying Go-Kart more than a year ago, when he was almost 10 years old. If not busy, Pham Lan would bring Doug from Ho Chi Minh City to the track every weekend. Dai Nam and Binh Duong to practice

Doug Pham's Go-Kart uses a two-stroke engine with a capacity of 125 cc, which is limited to the limits of the Cadet class, the maximum speed only stops above 90 km / h. While adult cars have the same capacity, but have a roundabout of 14,500 rpm, speeds up to more than 120 km / h.

The Go-Kart track in Dai Nam is about 1.2 km long, a person who is considered a good race needs about 52-54 seconds to finish a lap track. If they are new, they need about 1 minute 5 seconds. Doug Pham only needed 60 seconds, even though he drove a dedicated Go-Kart for children. 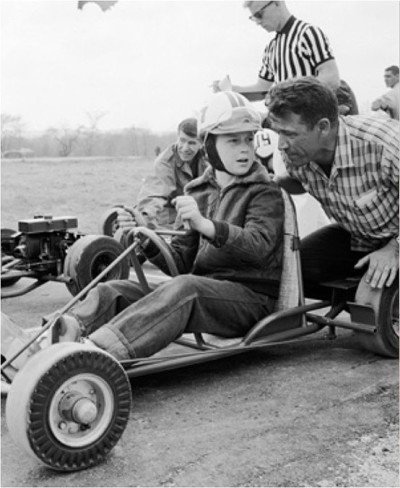 When asked about difficulties, Mr. Pham Lan admitted that it was a prejudice. Bad prejudices about racing are really existent, even very popular.

"In Vietnam, there is no concept and history of motorsport, so the views of the people and society are often ambiguous," Lan said. "Many people think that it is not a sport. So when it comes to racing, people will think of the bad side and the positive side when few people think about it."

Doug Pham was instructed by his father on how to move.

Mr. Lan said that he himself had an ambition to change that prejudice, but the reality was very difficult and time consuming.

In addition, any potential sports risks. Speed sports are more than that, "but it's part of the game," said Pham Lan.

Mr. Lan said that until now the club has not had any problems. "I believe you and Doug will have the right attitude, control the situation, and if you happen to have an accident, there are protective equipment like hats and jackets.

Even children under 10 years of age have additional neck restraints to reduce injuries, "said Pham Lan." But before going to the track, I always reminded no protective equipment to help you other than yourself ".

Children's Go-Kart is designed and manufactured by the manufacturer according to the safety standards of the FIA ​​World Go-Kart (CIK). Overseas, children have been playing this subject for a long time. But as a speed sport, Go-Kart always has potential risks and risks.

In addition to prejudice, the next obstacle makes this subject unscathed is a cost issue.

Unlike football, track and basketball, Go-Kart is very expensive. Insulated suits, helmets, gloves and dedicated shoes cost between several million and several tens of millions. The Go-Kart for children also costs about $5,000, while the adult car is about $10,000.

That's not to mention tire money and yard rent. Currently for adults, the cost for 10 laps lasts about 10 minutes and costs about 650,000 VND.

Location is also a difficult issue, because currently only the race track in Dai Nam organizes a professional Go-Kart race, the rest are held in a small, entertaining playground. Even Dai Nam is not a racing school dedicated to Go-Kart because of the long road and wide track.

The difficulty of child training, "first is to convince parents to let their children try Go-Kart, and the long way back depends on many factors," Lan said.

The second difficulty is management. Young children at this age are often hyperactive, sometimes acting instinctively.

"It is inevitable, I always remind you all over and over again. The teachers in the team will stand on the track to observe, just see who has an unfocused expression, start joking joking, I immediately stopped racing, because going on like that will affect myself and other friends, "Lan said.

The future ahead of Vietnamese sports racing

In Vietnam, there is still no really high speed race. The Go-Kart races held in Dai Nam are only communicative and have no weight on titles.

The first is the body and fitness of the Vietnamese. For example, in the European region, children have large bodies compared to their peers in Vietnam. Therefore, at the age of 8-12 many children are familiar with the sport, even smaller. Therefore European riders are very advantageous, they practice and get used to professional racing right from the beginning, which means that the time to accumulate experience and skills is longer. 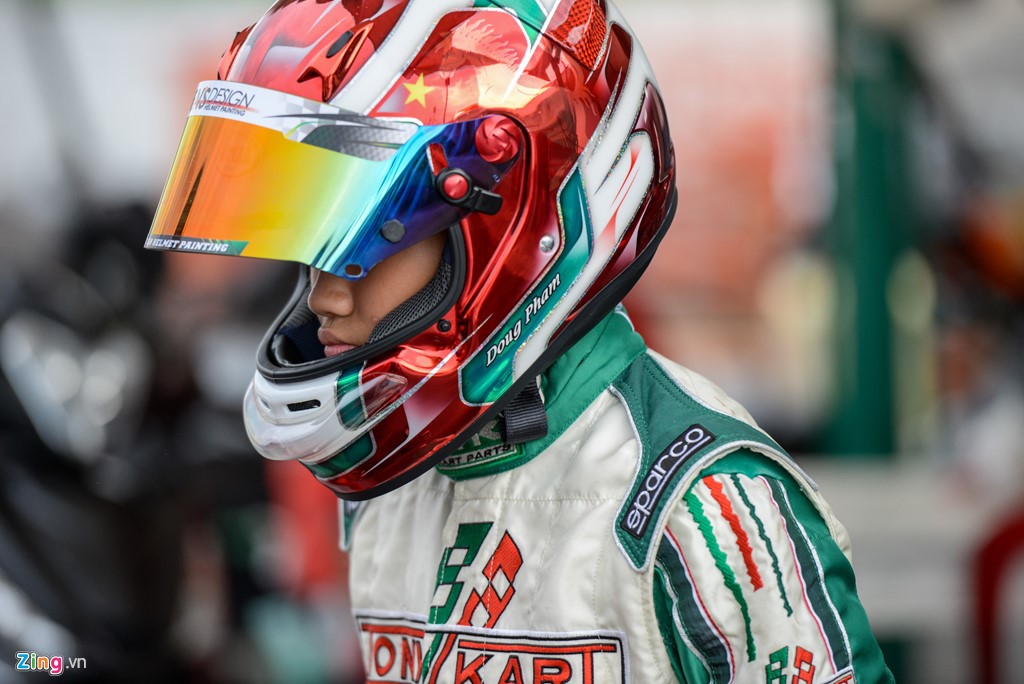 Although learning Go-Kart from an early age, Doug still started later than abroad.

Doug Pham's goal is to participate in overseas racing, but Mr. Pham Lan understands the difficulties, so helping Doug set goals not far from reality due to many different barries.

In the short term, Doug Pham will go to Singapore for trainning. By December, a friend of Lan would help bring Doug to Taiwan to take part in a race. Here, Doug will race under the Vietnamese flag. This is an exception because normally, each driver must have an international Go-Kart license issued by a local Go-Kart federation recognized by CIK, and Vietnam does not yet have this unit.

"Doug is not the only goal, I want speed sports to have a place, more and more young people join this sport. Since then Vietnam has gradually become a foundation of speed sports, speaking. In another way, these are the first bricks, ”said Pham Lan.

But Doug Pham is alone. The 6th grade boy often had to practice alone on the track, without an opponent to be a motivator, there was no agency competent to issue racing licenses - conditions for him to play under the Vietnamese flag Men in many countries.